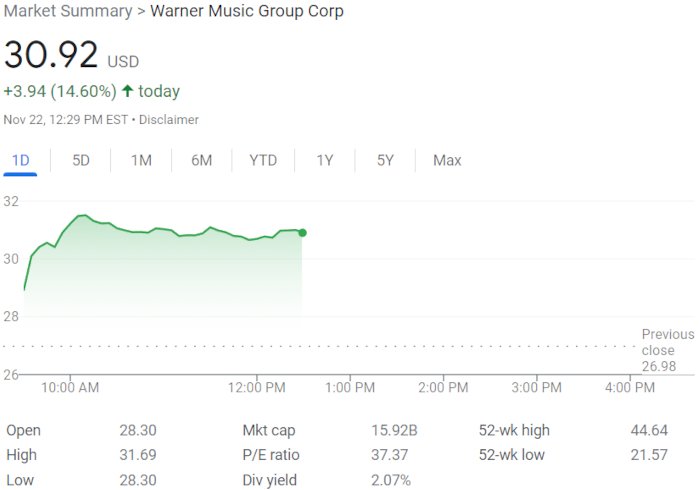 The Big Three record label, which is set to welcome a new CEO at 2023’s start, posted its Q3 2022 (the fiscal year’s fourth quarter) performance specifics today. According to the breakdown, Warner Music Group revenue finished at almost $1.5 billion during the three-month stretch, up 8.8 percent from Q3 2021.

Recorded music once again accounted for the lion’s share of the total, $1.24 billion, a YoY uptick of about six percent. And within this recorded figure, the major label identified $830 million in digital income (up $23 million YoY), $123 million from physical (down $4 million), $204 million attributable to “artist services and expanded-rights” (a $36 million boost), and $87 million from licensing (a gain of $17 million).

However, the digital sum “includes $31 million in downloads and other digital revenue from the Copyright Settlement” – without which it would have suffered an $8 million YoY slip – and streaming revenue dipped by 0.4 percent YoY.

When made to reflect “the impact of a new deal with one of the Company’s digital partners,” though, recorded music streaming income actually grew by 4.7 percent YoY, per execs. The growth in artist services and the renewal of DSP deals are said to have offset a “high single digits” slowdown in ad-supported revenue.

(For reference, Sony Music Entertainment reported a 34.1 percent YoY increase in Q3 2022 recorded music revenue from streaming, besides a 19.6 percent YoY increase in subscription and streaming revenue for Universal Music Group during the period. WMG CEO Stephen Cooper said during his company’s earnings call that he’s “optimistic” further streaming price raises are on the way.)

“Finally, the revenue growth curve of emerging streaming platforms continues to outpace more established formats,” Cooper relayed during the same conference call. “These new platforms are all heavily reliant on music, and as engagement continues to grow, we expect monetization to follow suit. In our recent deal with Meta, our annualized revenue from this category reached 370 million [dollars] this quarter.”

Shifting to the publishing side, Warner Chappell is said to have pulled down $254 million throughout the quarter, for a nearly 25 percent jump from Q3 2021.

Predictably, digital drove Warner’s publishing growth, with revenue in the sub-segment having spiked by $39 million YoY to crack $159 million. Publishing income from performances grew by $10 million to hit $40 million, per the resource, while sync ($39 million), mechanical ($13 million), and other ($3 million) remained flat against their Q3 2021 counterparts.

At the time of this piece’s writing, Warner Music Group stock (NASDAQ: WMG) was up 14.6 percent from Monday’s close, at $30.92 per share. Earlier in November, the business announced an $82.4 million quarterly dividend.